< < What Chuck Jones and others thought about Lola?
The Forgotten Toons > > 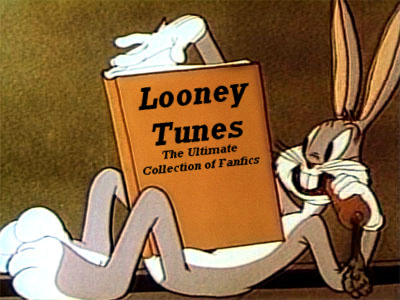 Bugs Bunny loves to read! Especially he loves reading fanfics featuring his beloved wife. However, for some reasons he omits some of them...

Shortly after the premiere of "Space Jam" featuring the debut of Lola Bunny many fans began wondering what happened with Honey Bunny. Some of them showed their versions in their fan-fics published mainly in fanfiction.net and in their works they shared on DeviantArt and Facebook.

What was Honey's fate? Did she stay with Bugs or they got divorced? Or maybe Honey visited a beautician in order to change her look and appear as Lola in "Space Jam"? Let's look closer at selected fan-fics...

The most tragic version of Honey's fate has been described by Siamese712 in the story titled "Secret Affairs". At the end, Ace Bunny shows Lexi Bunny a photo of Bugs and Lola. Lexi realizes that Ace looks very different than Bugs Bunny, his ancestor. Here's a fragment of the story:

Lexi flipped the photo around to read the names on the back, "Bugs and Lola Bunny." Lexi flipped it back, "They look happy."

"Ya, Apparently Bugs had an ex-wife who he had a son wit'. My biological great grandmother, Honey Bunny. She ended up diein' in an accident leaving him with baby Lester. He was an actor and for a movie dey hired Lola for a basketball movie. Durin' da time it took to make the movie she had a boyfriend who ended up ditchin' out on her when she accidentally got pregnant. Her boyfriend question who the father was because he saw dat she really liked Bugs, and accused her of bein' unloyal. Even though he turned out to be cheatin' on Lola. Bugs fell in love with her the moment he first met her so when he learned what happened he was there to comfort her. Soon enough they got married and excepted each others children as dere own. Lester grew up t'inkin' Lola was his mother and Lacy, Lola's daughter, grew up t'inkin' Bugs was her father. Dey didn't even listen when dere parents told them da truth."

In a fanfic titled "Hare Today, Gone Tomorrow" by Raha, Honey Bunny... vanished. Nobody knows what happened, she just went to shop to buy some milk, and vanished. Naturally, Bugs Bunny begins searching her. We don't know if Honey Bunny has been found because the story is left unfinished. Here's the fragment in which Bugs Bunny discovers Honey is not in a place she should be (that means, with him, in bed):

Bugs Bunny awoke with a start and looked around in disoriented confusion. The first thing his foggy mind noticed was that the clock read 10:55. But wait, that wasn't right, she never let him sleep that late...

No answer, but for the echoes of his own voice wandering forlornly back to him where it slunk under his bed. Bugs yawned and stretched, slowly crawling out from under the covers and rubbing sleep-sanded eyes, making his way towards the bathroom. A quick ten minutes later found Bugs standing in the middle of the kitchen, staring at an empty table and wondering where breakfast was.

Where is she...? he wondered, scratching an ear, an uneasy feeling beginning to twist itself into knots deep within his gut. It was then that he spotted the note, scrawled in her familiar neat hand on pink stationary, lying next to the tea-pot.

He picked it as if in a daze and stared at it for a moment, not really reading, but waiting for his vision to focus. Then finally the words swam together and Bugs sat down, nursing a cup of carrot tea.

"Bugsy,
If you're reading this then I ought to tell you it's late and that you should be in bed, young man. As for me, I couldn't sleep. You needn't worry, I noticed we're out of milk, so I went to the store and I should be back way before you wake up (or rather when I wake you up) and stumble your way down here. This is just in case you docome down before I get back and worry yourself to death. We certainly wouldn't want that, now do we? More than likely, though, I'll be back under the covers before you know I'm gone
Hugs and kisses,
Honey"

Bugs put the note down, went to the refrigerator, and opened the door. It was nearly a full minute before he could process that something very important to his happiness was missing.

The milk was gone.

All that was left was an empty carton, and for a moment it resembled Bugs's mind as he tried to digest the fact that the love of his life had never come back home...

The beginning of Honey Bunny's carreer

In "Long Story" by Spootay we meet Robert McKimson reading letters he received from fans. He throws most of them into a waste-bin. However, one letters looks interesting to him...

"Dear Mr. McKimson
I was a big fan of your cartoons, and am currently a fan of your comics.
Probably one of the most devoted. In response to your ad, I was thinking it'd be nice to have an issue devoted to the female Looney Tunes characters. They don't seem to have a very prominent position in the comics. How about having one with the rogue bachelor Looney Tunes teamed up with a female companion.
That's my 2 cents
Sincerely,
Honey Bunny, Sunnyvale, CA"

"Sunnyvale, eh? That's only about 15 miles out." Bob scratched his chin in thought. "I think I need to arrange a meeting with this "Honey Bunny". She's given me a terrific idea."

An interesting thing is that author of this story very often and sometimes quite distinctly expresses their reluctance to Honey Bunny, at the same time recognizing Robert McKimson, her creator.

Honey and Lola met together!

In a fanfic titled "In The Beginning" by J. C. The Wabbit Honey Bunny and Lola Bunny meet together. Their meeting ends up with a quarrel about who is real Bugs' love. At some points, girls start to call each other dumb sluts and eventually they give each other slaps. Honey is presented here as a bad woman who tries to break Bugs and Lola's marriage. This is a typical story written by a Honey-hater.

In other story the same author describes the situation before production of "Space Jam". Here, Honey Bunny gets divorced with Bugs Bunny and runs away to a bunny that is just a little richer than he is. Again, Honey Bunny is presented as "the bad".

The same author, using a nickname of Da-Wabbit, published in DeviantArt a series of pictures showing Honey and Lola's meetings. These meetings end up badly for Honey as she is killed, burned, decapitated or suffocated by Lola. Some "fans" are really hard to understand...

Honey and Lola - mother and daughter

In "Reunion" by Commander we learn that Honey and Lola are in fact... mother and daughter. Naturally, Lola's father is Bugs Bunny. Nowadays not many people know about Honey's existence - Honey ceased appearing to allow Lola develop her carreer.

In Chapter XIII of "A Time To Every Purpose Unto Heaven", a story written by Paul Kellogg, Honey Bunny falls into depression. Recently, a movie titled "Space Jam" was premiered. Although Bugs and Honey are still together, the situation is very hard for them. Especially for Honey who says:

"I can't walk out of our front door without being pounced on by those sleazy photographers and reporters asking me how I "feel" about losing you to Lola Bunny!!"

Bugs Bunny ensures his wife he will do everything he can to get everything back to normal.

In the tale, Bugs, Honey, Lola and Chuck Jones and Andy Fox work out a full disclaimer with WB, so that the Lola / Honey Scandal is corrected by the Press. All works out well for the Bunnies.

"A Time To Every Purpose Unto Heaven" is a very long story and the situation described above is just one of many motifs that appear in it. Honey appears in later chapters as well, accompanied by Bugs, of course.

In some fanfics Honey Bunny changes her visual appearance in order to appear along with Bugs Bunny in a movie.

< < What Chuck Jones and others thought about Lola?
The Forgotten Toons > >